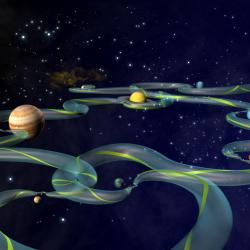 Europe has a long tradition of space exploration. It ranges from the vicinity of the Earth (Smart-1 around the Moon) to the most distant landing ever performed in history (Cassini/Huygens) through the journey to a comet (Rosetta/Philae). European interplanetary missions cover the full range of applications: Sun, planets, satellites, comets, asteroids.

The objective of this seminar is to perform a state-of-the-art of on-going and future missions. To fit with a one-day seminar, a selection was done: the morning session will focus on small bodies, while the afternoon session will be dedicated to other types of missions with a final focus on return of experience of in-flight missions.

“The MMX mission : the role of flight dynamics for orbiting and for roving” E. Canalias (CNES) & S. Tardivel (CNES)

The MMX mission from JAXA plans on studying the moons of Mars from its arrival to the Martian system in October 2025 and up to September 2028. The French contribution to MMX includes the delivery of the MIRS payload (an infrared spectrometer developed by LESIA and CNES), a 25kg rover (provided by CNES and DLR), and a collaboration between CNES and JAXA flight dynamics teams. The Flight Dynamics (FD) participation of CNES teams goes from the preliminary design of trajectory scenarios for the Phobos proximity phase, to the cross-validation of certain JAXA FD computations aimed at the preparation of operational activities. Furthermore, CNES-FD engineers provide support to the MIRS and Rover teams when expertise in orbital mechanics is required, in addition to developing the FD software to be integrated in their respective ground segments. The MMX Rover should be deployed at the surface of Phobos in early 2027, acting as a scout for the later landing and surface sampling of the MMX spacecraft. Though the rover itself does not orbit anything, orbital mechanics have remained a core component of the project, from phase 0 all the way to operations, and was key for major choices and trade-offs in the rover design. Because of the rover limited capabilities for its bold ambitions, the rover team and the CNES FD team have studied some crucial aspects of mission analysis well in advance and in more details than what we may have done for a spacecraft mission. After a presentation of these activities, the talk will try to provide some general insight into the role flight dynamics for surface explorers, be they human or robotic.

After DART impact, the mothercraft Hera, carrying two cubesats Milani and Juventas, is planned to be launched at the end of 2024 and aims at observing the Didymos/Dimorphos binary asteroid system, in particular the effect of the impact and the deflection of Dimorphos. The CNES contribution is twofold: the operational mission analysis studies for the two 6U cubesats, from the mothercraft ejection to the realization of the scientific objectives of the different payloads (imager, radar, gravimeter) and the proximity operations in 2027 within the C-FDSOC (Cubesats Flight Dynamics and Science Operation Center: Flight Dynamics and Mission Programming) in support of the CMOC (Cubesat Mission Operation Center, Belgium) in direct interface with the HMOC (Hera Mission Operation Center, Germany) as all uplinks and downlinks transit through the Hera mothership. Taking into account the mission constraints for each phase implies specific trajectories and dedicated maneuver strategies.

Apophis is an asteroid which will pass close to Earth on April 2029 (the minimum distance to Earth center is about 40000 km). DROID is a mission concept in collaboration between CNES and JPL to exploit this unique opportunity to study the interior of the asteroid.
DROID’s architecture comprises three spacecraft: a Mothership and two 6U CubeSats. The mothership carries the cubesats and releases them at Apophis’ approach a few months before Earth encounter. The 2 cubesats are equipped with radars and are positioned antipodally in an orbit close to a SSTO (orbit perpendicular to the Sun direction).
The presentation will give some of the mission characteristics, and show some of the results that have been obtained during the phase 0.

EnVision is next ESA's orbiter to Venus and was selected in 2021 as the fifth M-class mission of the ESA Cosmic Vision Science Programme.
With target launch in late 2031, its main goal is to study the planet from its inner core to the upper atmosphere to determine how and why Venus and Earth evolved so differently.
This presentation is dedicated to EnVision Mission Analysis aspects, mainly focusing on trajectory analysis and design: launch scenarios, Earth-Venus transfers, Venus orbit insertion, aerobraking, and science orbit, selection.
Finally, the current mission baseline is outlined as a result of relevant trade-off analyses and mission constraints.

The Jupiter Icy Moons Explorer (JUICE) is the next ESA large exploration mission. The JUICE mission will provide a thorough investigation of the Jupiter system with emphasis on the three ocean‐bearing Galilean satellites Ganymede, Europa and Callisto.
This presentation will detail first the secrets of the interplanetary trajectory, from the LEGA to the launch into a pseudo-resonant orbit. Then the tour will be presented with a focus on each phase: the Ganymede-assisted Jupiter orbit insertion, the pump-down sequence, the Europa phase, the Jupiter high latitudes phase and the transfer to Ganymede via a low energy endgame. The last part of the presentation will focus on the design of the Ganymede in-orbit phase.

The physical return of samples from Mars has been a top priority of the international planetary science community for over a decade. Today, the key science objectives of Mars relate to understanding the evolution of its climate and geology, searching for evidence of extinct or extant life and past habitability, and preparing for eventual human exploration. A wide consensus is held that a mission which enables the analysis on Earth of samples returned from well-characterised sites would allow the greatest science return to be made across these objectives. The return of samples allows for analysis on Earth using large, state-of-the-art instrumentation able to exploit advances to technology as they are made.
Recent accomplishments in Mars exploration have increased confidence in the technical feasibility of returning samples. NASA and ESA are currently collaborating to coordinate a joint MSR campaign consisting of the Mars 2020 Project, the Earth Return Orbiter Project (ERO), the Sample Return Lander Project (SRL), and the Sample Receiving Project (SRP).

ERO mission and spacecraft will be the focus of these presentations.

Launched on the 20th of October 2018 from Kourou, the ESA/JAXA BepiColombo mission started a 7 years interplanetary cruise towards Mercury, based on a series of fly-bys of Earth, Venus and Mercury and on extensive use of Solar Electric Propulsion (SEP). The purpose of this presentation is to present the Orbit Determination (OD) activities that have been conducted by ESOC Flight Dynamics for the purpose of navigating the spacecraft during the first two SEP arcs, from December 2018 to November 2019, and then providing additional follow-ups and considerations from successive SEP arcs until now. Relevant aspects of the BepiColombo mission and spacecraft are introduced, including the planning and navigation approaches for SEP arcs. The OD setup is also discussed, including the main operational results, showing a good performance of the SEP system and the suitability of the navigation and overall operational approach.

The ESA LISA mission will be the first space-based gravitational wave observatory. It consists of three drag-free satellites flying in an Earth-leading or Earth-trailing orbit in the so-called cartwheel formation. In this talk, I will present the peculiarities of this mission from the orbital mechanics point of view. The design of the operational orbit, the SEP transfer and navigation will be covered.